Georgia: “We can be a surprise for many teams and that is our advantage” 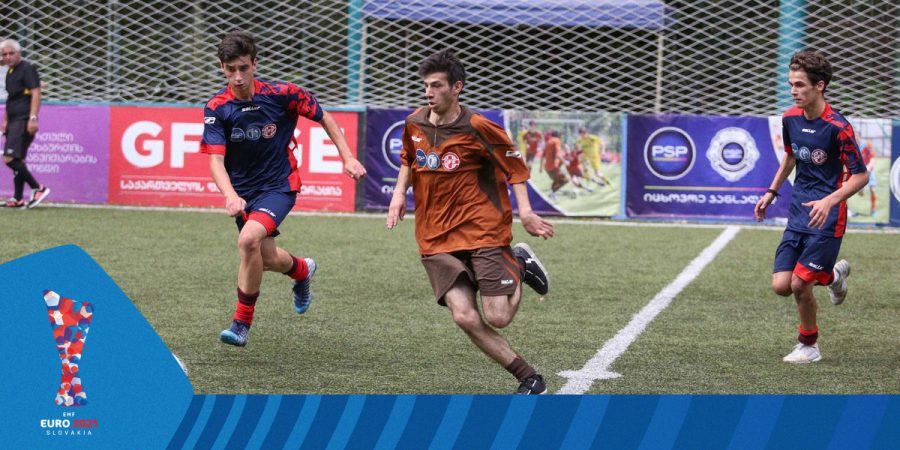 In our next interview we were happy to talk to Otar Abuladze, the manager of the national teams of Georgia. The minifootball scene in the country is an emerging one, but they started from the right side – building the youth leagues. But let’s leave it to Otar.

This is your first ever appearance at the Euros, what should we expect from yourselves?

You should expect a very motivated and organized national team and association. People who are in love with football in general and minifootball specifically, happy to become part of European minifootball family.

Do you like the fact that you will be unknown to all the other countries, so they can’t study you and find any weaknesses?

Of course we will try to use the effect of surprise and unidentified team. I think it must be considered as our advantage.

What is the key ‘superpower’ of your team?

How do you see your perfect squad?

I see perfect squad as one which is ready mentally to win. On other issues like tactics, playing skills etc. All this may be turned into perfection by hard work.

When will you start your National Team selection process?

From early September we will start the process of team selection.

How can the average player from Georgia become a part of the National team?

There are several minifootball tournaments organized right now in Georgia with almost 1200 players. From late august we are starting Georgian national minifootball championship with 8 professional teams. This teams are in the process of creation, and their rosters will be filled by the best players from the tournaments I mentioned above. National Team would be selected from professional teams. That is the way average players must go through to become a part of national team.

Will getting out of the group be considered a success, or are you going to Kosice to win the title?

As long as minifootball is the most played sport in Georgia, we think, that on national level we are able to present competitive team which will aim to win the title.

How did you come up with the idea to organize minifootball events in Georgia?

At the end of last year Georgian National Mini-Football Association created the document of minifootball development for 2021-2025. This document considers all necessary steps for institutional, functional, and organizational and sports development of association.

One of the main parts of this document is international minifootball, which we consider as core of our development.

Our strategy of integration into international minifootball is concentrated around organizing in Georgia as many international competitions as it could be possible. Cooperation with EMF and WMF on this issue is crucial.

You’ve recently joined EMF, but you don’t seem like a new member, your preparations look very professional, tell us about your footballing background?

We are involved in minifootball activities from 2009. We organized almost 15 huge minifootball projects before establishing the Association, which were mainly amateur corporate leagues.

Tell us a bit more about your upcoming national championship?

So would you say the EMF EURO is an important experience for your players and country?

Definitely yes. This would be an experience that will help us not only in future international minifootball activities but also on planning and organizing minifootball here, in Georgia.

What are your plans for the near future? Have you got a message for the other teams?

For the near future we are preparing the U23 team for participating in WMF U23 World Cup. Basis for the U23 team is our school/college league 2021 with 84 teams participating and almost 1000 players. The only problem is that our team will be composed of 17-18 year old players, but we will try to transfer this age difference into motivation boost for our players.

How many minifootball players are registered in your country?

More than 100 players to be considered as professionals. More than 1000 amateur and school/university players.

PrevPreviousSlovak home team has started its journey to EMF EURO 2021
NextEngland: “Minifootball has a long way to go yet, but it’s going in the right direction”Next